Action from Executive Committee: we bought some land.

1. District Attorney Kenda Culpepper presented to council the county-wide plan for the "No Refusal" weekend over the Labor Day holiday.

Should be called "Quicker Warrant" weekend as "No Refusal" could technically always be the case if the local governments wanted to do so.

Basically, if you get pulled over and the police suspect you are driving under the influence (DWI) and you refuse a breathalyzer, the police have a couple local judges that are on call to sign a warrant for a blood test.

Rockwall's Municipal Judge Cathy Penn will be one of the judges on call and if used, the city will reimburse the county $120 per hour for Judge Penn's time.

Last year, the county used the on call Judges 3 times. Also, there were less refusals than past years. In this case, crime deterrence is credited.

City agrees to the agreement 6-0. (Glen Farris was a no-show.)

Employees spend time learning what goes on in other departments, while citizens wonder why the Water Department serviceman is dressed in a tie and loafers.

Graduates received a plaque and money.

5. 1st Reading of a zoning change for the hillside up from the Harbor.

Basically, the majority of council and staff want to fundamentally change the demographic and feel of Rockwall by turning it into Plano, Jr.

The city will foot the bill (probably as certificates of obligation or a TIF) to put in all the roads and infrastructure, as well as paying for moving the exit ramp from I-30 back.

The cost is in the millions to do so, with guarantee of any development. Unless of course there is already some secret developer involved that has not been divulged, but I really doubt that is the case. I guess someone could get past campaign finance reports and compare those to any future developers that magically appear. Not gonna be me, I have too much faith in my government.

The residential will possibly include townhomes and condos, NOT APARTMENTS OR MULTIFAMILY DWELLINGS , even though some of the elevation drawing and renditions show residences connected at 3 walls, the ceiling and the floor to other non-apartments. They are merely residences that a connected together apart from one another.

I repeat, multiple families living in the same building apart from each other are NOT APARTMENTS. Several council stated this.

The "urban residential" obsession is obviously filling a need in the market that the market forces are too stupid to recognize. People move away from the urban areas to the suburbs and demand an urban setting they chose not to live in in an urban area. Duh.

Councilmen Sweet and Scott then stamped their feet and demanded to know why Councilmen Russo and Sevier were opposed.

Councilman Sevier's main opposition is the "cramming" in of the homes, aka "row housing". He also noted that he has never supported increasing multifamily-type house in Rockwall, unlike other councilmen who oppose multifamily except when they vote for it.

Councilman Russo's two reasons for not supporting were the negative impact of more traffic at an already high density traffic area and he believes the developers should be planning the best use of land, not the city.

After 30 minutes of monkeying around, the city avoided a deadlocked vote of 3-3 (Sweet claimed he would oppose), the council tabled the item until the next meeting when the cards would be stacked in favor of passing the item.

(Councilwoman Nielsen excuse herself from the remainder of the meeting.)

He a few blocks to Washington St and was again burdened by the Fannin St repairs.

Long story short, he agreed to put in fire sprinklers by x amount of time (3 years I suppose) in order to fulfill the SUP . He has not done so for various financial reasons, and still cannot afford to do so. He needs a little more time to figure it all out and was granted 90 more days, 5-0.

2. Fella living in the ETJ of the city wants to be released from Rockwall's ETJ and be taken into McClendom-Chisholm's ETJ. City didn't like that idea one bit. Failed without a vote. He's stuck.

On the bright side, he might some day get city water!

People who spoke do not want to be annexed. City could give a Rat's Donkey. Basically, the Mayor's position was that if you live in the ETJ we will annex you, like it or not.

Why call it a hearing if no one listens?

City must annex or as I was once told by a councilman, "People would do whatever they want."

Patrick Henry would be so proud! "Give me liberty or give me death! Or not."

4. Councilman Russo wants the staff to look into setting up Cultural Arts Districts in the city.

Councilman Scott was the most vocal opponent because he is not interested in it. "The wine and cheese folk get too much attention and not enough for the beer and hot dog folk like [Mr Scott] and [David Sweet]."

Councilman Scott then asked Mr Russo why he would support this and not a multi-million dollar ball field monument?

Mr Russo: "This is way cheaper."

Councilman Sevier opined that staff may have too many projects and that if there is too much for staff, there won't be any followup.

Mr Scott then made a motion to have staff look into Cultural Arts District program. Passed 5-0.
Posted by David White (aka Caged Monkey #12) at 7:20 PM 1 comment:

An urgent matter kept me from all but the first hour of the meeting.

This handy pie chart will illustrate in a general manner how the time was spent in that hour. (Actually, this chart could be used to illustrate every meeting.) 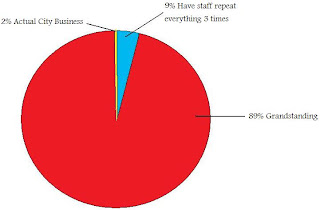