Blessed is the peacemaker? Criminals look out! (And the innocent as well...)

FORT LAUDERDALE—
Tania Ouaknine is convinced the police are watching her.

She's not paranoid — it says as much on the red sign painted along the side on the hulking armored truck that's been parked in front of her eight-room Parisian Motel for several days.

"Warning: You are under video surveillance," reads the bold message on the side of the truck.

From the front bumper of the menacing vehicle, another sign taunts: "Whatcha gonna do when we come for you?"

The truck is a new weapon for the Fort Lauderdale Police Department in the fight against drugs and neighborhood nuisances, and it looks like a Winnebago on steroids. They call it "The Peacemaker," and it may be a first in South Florida.

Mixing high tech with simplicity, the in-your-face strategy is straightforward: load an out-of-service armored truck with some of the latest surveillance equipment available and decorate it with police emblems. Then, simply leave it parked in front of trouble spots.

"Make no mistakes about it," said Detective Travis Mandell. "We want people to know that we are watching the bad guys."

In August, police got the first of their two Peacemakers after paying the Brinks company $10 for a discontinued armored bank truck. They retrofitted the vehicle with cameras that can stream live video back to headquarters. With its cameras hoisted on each bullet-proof window, the truck can gather panoramic footage for up to 700 hours.

Last month the department added a second truck to its arsenal, converting a former SWAT vehicle into the second Peacemaker. Police park the unmanned trucks in front of the homes of suspected drug dealers and at crime-plagued street corners.

On a recent afternoon, a Peacemaker had at least one of its eight cameras trained on Ouaknine's one-story establishment.

"They say I am running a whorehouse," said the 60-year-old innkeeper. "I run a motel. The only thing that I don't have is the five stars."

Police wouldn't say why they parked the Peacemaker last week in an abandoned lot directly across Ouaknine's Parisian Motel in the 500 block of Northwest 23rd Avenue.

Police and city records show Ouaknine and her motel had been the subject of an undercover operation targeting prostitution starting in September. Ouaknine was arrested on Oct. 28 on three counts of renting rooms to prostitutes for $20 an hour. Her case is pending.

The city's nuisance abatement board sent her a warning letter and summoned her to appear for a hearing in February based on the investigation. It's the second time since 2008 that the board has targeted the motel, city records show.

She says she's doing nothing illegal.

"They've tried everything to shut me down and have failed," she said. "Now they bring this truck to intimidate me and my customers."

Some neighbors surrounding the Parisian Motel say the truck is another form of constant police harassment.

On a recent afternoon, Leo Cooper watched as two undercover street-crime officers jumped out of an unmarked Ford Crown Victoria just yards from the Peacemaker. They began questioning a group of men gathered at the corner. Within minutes, one of the men ran away. A second man was charged with loitering.

"This is what happens here every day. We can't sit outside without being harassed," said Cooper, 27. "Now we have that truck. Most of us are not doing anything wrong. We can't be outside?"

The police department has met the allegations of harassment with skepticism.

"People who are abiding by the law should have no problems with this," said Mandell. "People may feel that their privacy is being infringed on, but when you think about it, every day you walk down the street you are being watched by 20 to 30 cameras from private businesses and homes."

The feedback is much different in a neighborhood less than a mile east of the motel, close to where Sistrunk Boulevard is undergoing a major refurbishing project. In December, residents rallied at city meetings to get more police presence after a rash of daytime home burglaries, including one on New Year's Day, said Anthony Lucicero, a neighborhood leader.

"We had all sorts of people walking up and down this street at all hours," he said. "Prostitutes, junkies, everyone."

In early January, police parked the Peacemaker at an empty lot on Northwest Fifth Court between 10th and 11th avenues. Neighbors say it's already making a difference.

"Before the truck, we were afraid to go to work knowing your house might be robbed in the middle of the afternoon," said Lucicero's neighbor, Tangerine Davis. "Now we go to work in peace."

Their biggest worry now, they say, is what happens when the Peacemaker drives away and the police are no longer watching.

"I wish they had another one out here," Lucicero said. "I have an empty lot right there they can use."

A check with the region's major law enforcement agencies indicate Fort Lauderdale's Peacemakers may be the first in South Florida, but not the first in the nation. News reports show that agencies in Green Bay, Wis., Lafayette, La. and St. Louis, Mo., have been using them for at least a year.

"We are definitely not doing something like that right now," said Deputy Eric Davis, a spokesman for the Palm Beach County Sheriff's Office. "I would love to see this for myself. Sounds pretty novel."

Norwegian Preachers! Or something.

SC mayor pulled over, then pulls trooper over 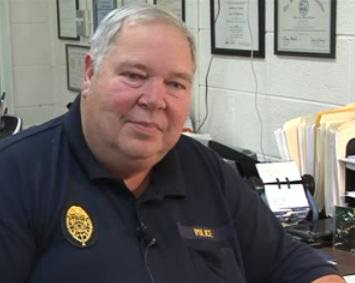 NORWAY, SC (AP) - The South Carolina State Law Enforcement Division is investigating the mayor of Norway's claim that he was legally empowered to pull over a state trooper after the trooper had pulled him over for speeding.

The Times and Democrat of Orangeburg reports that Norway Mayor Jim Preacher was stopped for speeding on Wednesday. After the traffic stop, Norway turned on the blue lights and siren in his vehicle and pulled the trooper over.

Norway acknowledges he was speeding, but says he was acting in his capacity as the town's chief constable.

The state Department of Public Safety has asked SLED to look into whether Norway's mayor does have powers of law enforcement.