Yep, it was just that simple.

The theme for this year is “African-Americans and the civil war” and “contributions of blacks during the civil war.”

1. Fellow from the Zoo spoke in anger about the upcoming water rate increase for Lake Rockwall Estates. (Should push mine to about $150-160.00 a month.)The mayor said the city was in the process of looking into the rate increase and that the request had to be approved by city council.

-Petty micromanagement of the looks of a new McDonalds, a company that would be unsuccessful if not for the meddling of the unqualified or incompetent.

-Best Buy lighting changes for outside signage. Denied because P&Z was afraid other businesses would also want lights to help promote business.

-Enlargement of accessory building in the Zoo. Passed 7-0.

-Expansion of SPR Packaging, lots of variances needed. Passed 7-0, with the added note from Ms. Jackson that she was “thrilled someone is expanding in this economy.” A comment that is strangely contradictory to those from the Mayor and some council who claim the economy is Rockwall is essentially immune from the economic problems plaguing the rest of the world.

2. Folks want the fee waived at the Harbor for an event to raise money for a non-profit organization. City waives fee for 501.c3s and Ms. Nielsen suggested they get the actual organization to make the request to keep more in line with the requirement. Will return next time.

Mr Farris opposed support as the event happens the same day as Founders Day. Recommended they pick a new date.

Needs an SUP, but the unified development code for Downtown does not allow any auto repair facilities, not even with an SUP.

City will have to change the code in order to allow SUPs for auto repair and then Mr. Archer can make application for the SUP.

After some risk management lessons from the Mayor and Council, motion was made to have staff make changes to allow auto repair facilities in the downtown district with an SUP.

4. Lady wants to talk about changes to trash service. She seemed to be for it and against it. But not really.

Mr. Scott explained there was much “misinformation” about the upcoming changes:

-No one will have to use both types of 96 gallon trash cans.

-If you want to continue to recycle, you will have to have at least the 96 gallon trash can.

The Mayor vigorously defended the proposal.

Mr Sweet explained that recycling is “good for the earth”. (Although he does oppose the changes – that’s good. Gaia will be pleased and angry all at once.)

Item will be back to council.

4. LRE water rate increase. Council will require a “show cause” from AquaTexas to justify the rate increase. Rate increases by private water providers in city limits must have council approval.

1. McDonald’s new store design has a rounded roof. Building standards have no provision for rounded roof. That’s the only reason for the variance request. Passed 7-0 without meddling.

2. Best Buy has had some lights illuminating the store for the last three years that do not comply with code. City noticed problem after three years and now wants Best Buy to not have those lights. Best Buy would like to change those lights - that no one notice or complained about for three years - for some projection lights to illuminate the blue field around the main sign on the building.

Mayor Pro Tem Farris wanted Best Buy to justify in dollars how this would increase the business of Best Buy. He also stated that the new light would not increase Best Buy’s earning power. He continued his opposition stating that not having the lights would not hurt Best Buy. He was also concerned other businesses would want similar lights.

Councilman Sweet took the other side of the issue stating that he wants the businesses in Rockwall to be their own experts. This wasn’t an unusual request and if other businesses made the same request that could go through the process just like Best Buy is doing.

Mr. Farris made a motion to deny the request which failed 5-2. (Nielsen also supported the motion.)

After the motion to approve was made, Mr Farris wanted to add a punitive requirement for a “photovoltaic study”. P&Z Director LaCroix said it would not be necessary. Motion passed without the punishment 6-1. (Farris opposed.)

3. LRE fella needs an accessory building to hide all the crap he keeps in his yard that the city keeps complaining about. He wants to enlarge an existing metal building, which will not meet the masonry requirement. A bunch of belly-aching ensued after a motion to deny failed, the motion to approve passed 5-3. (Sevier, Farris, and Scott opposed.)

4. Expansion of SPR Packaging and variances. Lots of discussion. Passed 7-0.

1. CIP task order contracts approval. Despite continued economic troubles plaguing the USA, the city is gearing up to promote bond passage in November. Baseball fields, downtown stuff, historic park, one other I think. Floating around the $40,000,000 mark I think. Possibly more.

Works for Wisconsin. And Dallas. And Rockwall ISD. And the Federal Government. And Texas.

2. Electronic sign won’t go away. Pointless and expensive. Does anyone other than city or council really care about this waste?

3. Change in the bum ordinance. You can still be a bum, but can’t set up temporary lodging on public land.

Missed the executive committee items as my pens wouldn't work. I'll guess and say it had something to do with appointing cronies or spending money.

Appointment #2 was postponed to next meeting.

4. Mr Sweet needed clarification, something about Oncor rate we are coordinating with other cities.

6. Ms Nielsen need clarification on this item regarding access easements. I wrote a lot, but finished my notes on the item with the sentence, "Man, this is complicated and boring."

2. Couple bums making people feel dirty or scared or offended and want them removed from the cityscape.

-Bums are breeding.
-No current ordinance against bummery.
-Rockwall is a lucrative place to buminate.
-This gives police the ability to "do something".
-Asked about legal challenges to the bum laws in Dallas.

Mr Eckert replied, "Not that I'm aware of." He did explaing bumming when called "loitering " was ruled by the Supreme Court to be protected under Freedom of Assembly.

-"What he said." (Pointing at Mr Scott.)
-He also mentioned "some emails", presumably anti-bum related.
-Some ladies in town were approached and got scared.
-The bums are not from Rockwall, according to the police.

Have to stop here a second. As I write this and watch Life (If you haven't seen, watch it on Blu-Ray if possible), I had to share the awesomeness of these brown-tufted capuchin monkeys in Brazil.

Let's see a councilman do that!

Back to Mr Sweet:

-Question about rewording of ordinance to allow non-profit groups to panhandle like bums.

Mr Russo added that the wording of the ordinance would forbid anyone from sleeping anywhere on public property, including taking a quick snooze on a park bench.

Mr Eckert and Mrs Couch will revisit the wording.

Mr Nielsen had concerns about how the bums will be charged and where the "vagrants" would go while awaiting justice. Chief Moeller explained [bums] will be charged with a misdemeanor and will stay at the Rockwall County Three Hots and a Cot Motor Inn.

She continued that she is not opposed to the ordinance, but had reservations with the wording.

A little more discussion and Mr Scott pulled the motion to have staff more time to rework the ordinance. It will be on the next agenda.

2. Flower shop moving, needs an SUP. Everyone from the neighbors to P&Z are in favor. Passed 4-0.

3. Christian Brothers Automotive back for the THIRD TIME. (Old blogs have info on the SUP) Gonna open up next to Home Depot between an Alzheimer's place and a bank.

Applicant was happy to be in Rockwell. (Named for an ancient rock well discovered by T.U. Wade while digging for a rock wall. Below is the earliest known picture of the well.) 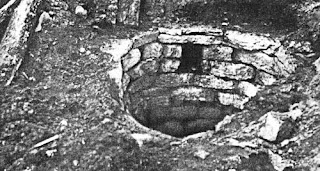 Without virtually no discussion and two speaking at the public hearing: (1) a competitor opposed to the idea and repeatedly cited a different ordinance as his argument; (2) The land owner adjacent to the property who supported the idea. The SUP was granted 4-0. Christian Brothers recurring nightmare of rejection ends. Unless they get screwed on the second reading.

4. Citizen Survey discussion. I could only handle a couple minutes of the discussion and fled to the Flying Saucer instead. Mondays are Pint Night!
Posted by David White (aka Caged Monkey #12) at 7:21 PM No comments: